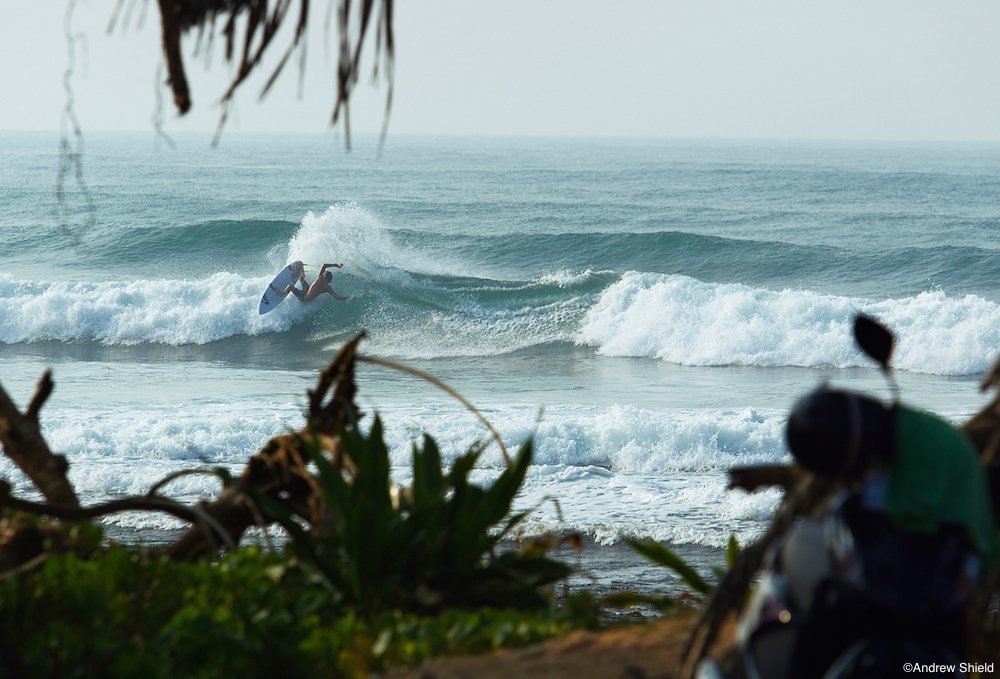 LUEX’s Sri Lanka surf expert Martin discusses his top tips for a smooth and easy-going surf trip to this beautiful Indian Ocean island, from useful phrases to what boards to bring and the best items on the menu.

Sri Lanka is one of our favourite surf destinations: the combination of easy flight connections, warm water, mellow but consistent waves, fascinating culture and affordable pricing is simply unbeatable!

While the season for Arugram Bay on the east is actually about to end, surf’s now up in the southwest of the island, which receives quality waves from October through to April – just a few hours and a safe airport shuttle away from Colombo International Airport. Waves are generally not as hollow and heavy as in Indonesia, so it’s the perfect set up for beginners and intermediates. However, experienced surfers or anyone who prefers a punchier break will also get their quality time in on solid waves like Ram’s Right and Unawatuna.

Related Article: Why you should surf South West Sri Lanka

I’ve been lucky enough to visit and surf Sri Lanka several times recently, so here are some of my top tips to help make your trip run as smoothly as possible:

One of the best aspects of Sri Lanka is how cheap everything is! Saying that, lots of cafes and other vendors won’t accept card, so it’s good to keep a plentiful stash of cash in your wallet.

Generally it’s pretty easy to find somewhere to take cash out, but be careful with the exchange rate! It’s best to get some cash at the airport ATMs, but there are also several ATMs in bigger towns like Weligama.

Sri Lankan food is generally really good, and cheap! It’s much like Southern Indian food, with lots of coconut –  and lots of spice if you aren’t careful!
Coconut Curry is amazing, and Chicken Kottu Roti is the best! Think chopped up roti with chicken and spices. Our partner The Surfer Weligama actually has an amazing restaurant on site too, with great local food at local price.
Beware: street food is VERY spicy, so be careful!!

Traffic is officially off the scale mental in Sri Lanka, with big busses and trucks overtaking all over the place.

Unlike Bali, we don’t recommend hiring scooters to get around (though they are available if you want), as it can just be so sketchy… However, Tuk Tuks are so readily available and so cheap that they’re not really necessary anywhay – for a few EUR/USD you can get a lift to the surf breaks, and pick your driver’s brains for local knowledge while you’re at it.

There are several languages spoken in Sri Lanka, but most people speak Sinhalese (~75%) or Tamil. You can normally get by in English in most places, but it always helps to pick up a few phrases before you go!

5. What boards to bring?

Waves are generally more mellow than some other Indian Ocean destinations, so bring something with a little more volume – a fish or longboard could be perfect for the cruisy peeling waves. However if you’re aiming to surf just the bigger and hollower spots then your standard short board will be fine.

6. What other stuff comes in useful?

Surf Zinc can be really useful to stop your face burning when out in the water (it can get really hot)! Bring a few t-shirts to cover up in when surfing too, and plenty of normal sun screen. Local kids/tuk tuk drivers will really appreciate some stickers or any old surf kit you don’t need anymore too! Other than that, a pair of board shorts, flip flops, shades, and maybe a Kindle, and you’re all set!
Martin
Martin is one of LUEX's surf gurus, and specialises particularly in trips to Sri Lanka and Europe. He's our proof that Brits can rip too: when he's not out chasing waves around the world you'll find him tearing up the Alps on his snowboard.