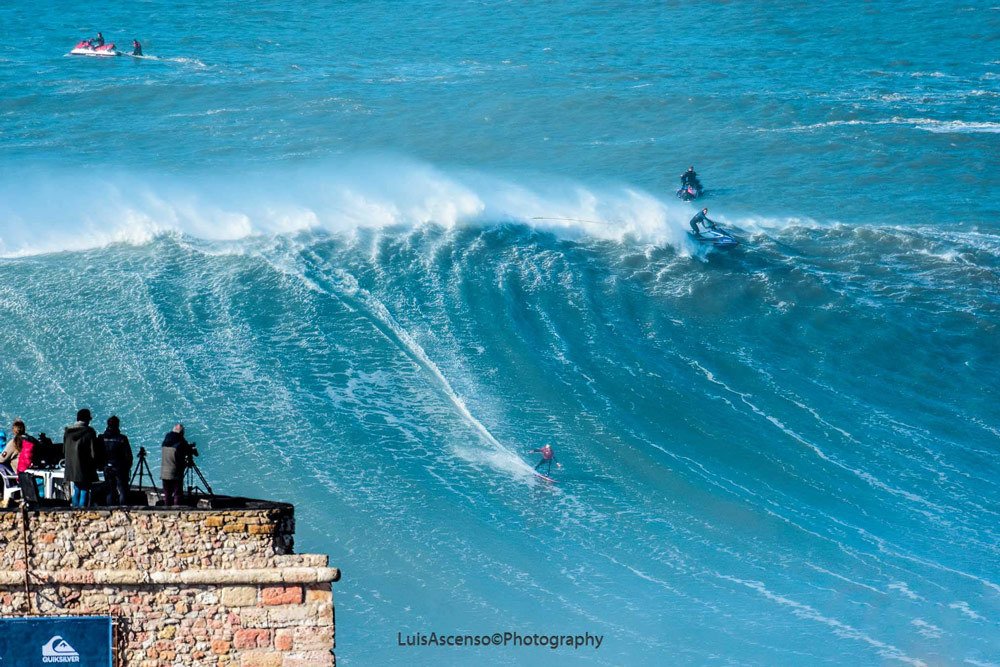 Big Wave Surfing 101 – What to do, what to ride and where to find them

There are monsters out there. They bolt toward land and attack our shores with the full force of the ocean. Some heroes are brave enough to find, challenge and tame them, but most of us stare from the sidelines or a computer screen – jaws dropped – squealing, “Are you kidding me!?” 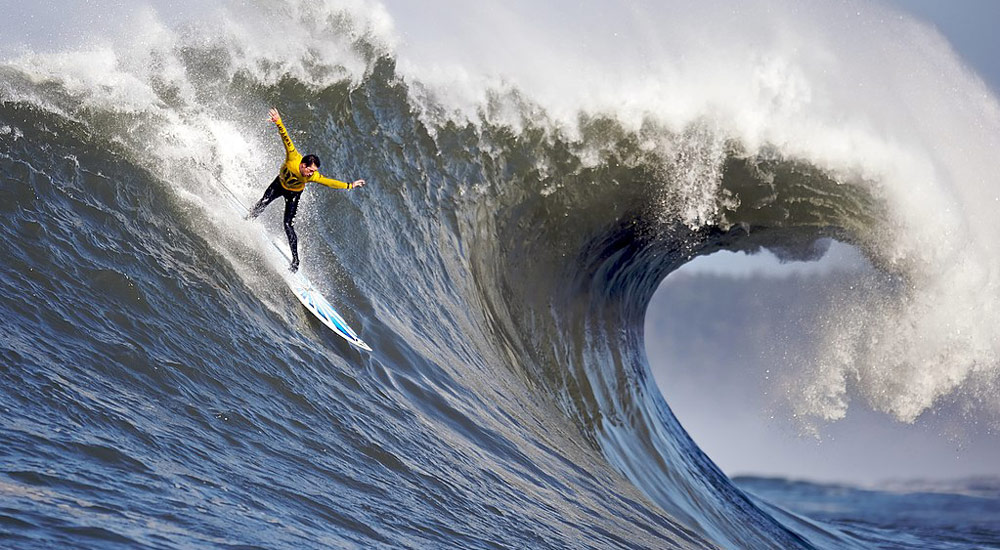 This is big wave surfing. It’s a surfing discipline that most can’t comprehend or will ever try, so here we break it all down for you.

What is Big Wave Surfing?

For it to be considered big wave surfing, a surfer must tackle a wave of at least 20 feet (6.2 metres) high. Speeds of around 80km/h (50mph) are common, and wipeouts will see bodies skip along the water’s surface, like pebbles skimmed on a lake. Many lives have been taken in the process, but big wave surfing has only surged in popularity and in our manual to XXL surfing, we reveal the smaller elements of riding the bigger waves.

Where to find big waves

Big wave surfers will book tickets to most parts of the globe. Places like California, Tahiti, and Hawaii will reel in most, but so many other spots are being put on the world’s XXL surf map.

Recognisable for the lighthouse and 16th Century fort in the foreground, Nazaré is home to a mountainous wave, Praia do Norte, which can sometimes push the 100-foot mark. Nazaré, the sleepy town 60 clicks north of Peniche, joined the WSL Big Wave Tour in 2016 and had become somewhat of a household name to anyone interested in what freakish waves the ocean could throw up – and what psychotics would ride them.

October to February is the best swell window for surfing big waves in Portugal when the North Atlantic swells smash the coast. But that isn’t the main culprit for the wave height.

Nazaré Canyon is an undersea ravine just off the coast of Nazaré, which is said to be the largest in Europe. With a depth of over 5,000 metres and at 230 kilometres long, water is funnelled toward the canyon’s headwall in huge volumes. Incoming tides boost the swell, and then the waves meet and dump themselves onto Nazaré’s shores. Scary.

In the middle of a field of dark water, where France meets Spain, you’ll find monstrous waves at Belharra. When Europe gets the call of a big swell from the North Atlantic, this is where most big wave specialists are headed.

If you can handle the speed, the take-off at Belharra is relatively manageable. But once the peak falls over itself, you’re looking at 50 to 80-foot walls of water being taken by gravity. It doesn’t pitch a tube, like Teahupo’o or Jaws, but the sheer size of these waves is frightening enough.

This day was special. I just wish i was there. 📷 @vincentkardasik #belharra #france #thebigwaveproject #swellchasers

Jamie Mitchell would have a story to tell after a memorable wipeout in January 2014, paddling onto one of the biggest rides ever attempted and earning him a nomination at the Billabong XXL Big Wave Awards.

Lesser known to the surf community is a beast labelled La Santa, sitting in the isolated Canary Islands. The North Atlantic generates mega waves that belt the Canary Islands, thanks to huge exposure to the channel’s northwesterly swells.

Swell size can get anywhere from 2-foot to over 30-foot at La Santa, and while not as big as its more famous counterparts in France and Portugal, the wave is heavy. La Santa is super hollow and hands out vicious hold-downs to the few locals and not-so-local big wave surfers who take up the challenge.

The biggest and gnarliest wave of Central America undoubtedly goes to the notorious water mountain of Puerto Escondido – affectionately known as Mexican Pipeline.

Thousands of miles of uninterrupted ocean in the South Pacific Ocean creates a run-up for mounding swells to press upon the shores of Oaxaca, home of Puerto Escondido. It neighbours the South Pacific’s biggest storm generator, with only a few islands in far-away Tahiti shadowing the Mexican coast from the incoming swell.

Swells are generally manageable, at about four to six-foot, for the above-average punter to bag a few barrels and claim they’ve surfed Mexican Pipe. But stick around for the big swell window, as a forty-plus-foot colossus is the norm for anyone brave enough to ride XXL Puerto.

Incoming tides bring in the swell, supercharging the wave height and producing the well-known barrel. The season starts from late April and goes until early-September. But Puerto sees epic waves, and hair-pulling wipeouts, all year.

Hold downs are arguably the biggest perils in big wave surfing. Two and three-wave hold downs are common, and surfers need to be prepared for this gruelling time underwater without restocking on air.

A big wave can push surfers 20 to 50 feet below the ocean’s surface and that creates phenomenal pressure on the lungs. Let’s not forget being tumbled by the wave’s vortex like clothes in a washing machine, which will completely stir equilibrium.

Being pushed so far down also means close-encounters with what lies beneath. There is a lot of ugly rock and coral beneath most big wave setups. Research on the targeted wave is as crucial as to know where to steer your board and where to stay the hell away from.

Big Wave Surfing is all about the Preparation

The body uses over 60 muscles when it’s merely standing upright. So imagine what’s being put to use to navigate an 8-plus-foot board down the face of a wave that would engulf your house.

Underwater rock running is still popular for big wave athletes, as it contributes to better lung capacity, strengthens your core and builds the muscles needed to keep you upright on your stick. But all that matters is you’re constantly putting your body to the test and getting in solid workouts – every day. 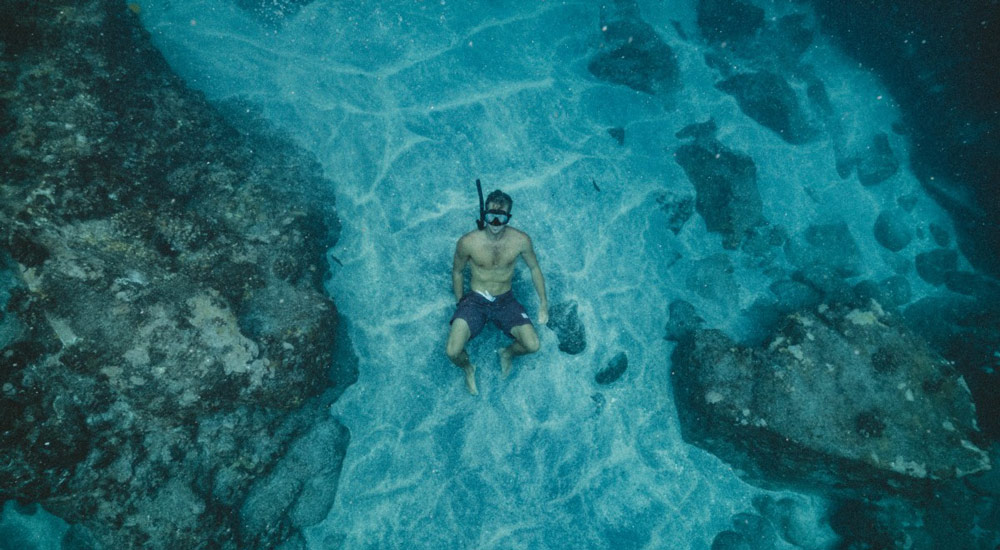 Yoga will help the body stay limber but also contribute to a strengthening of the diaphragm. Yoga trains the body to use air more efficiently, which is as important as it gets to be ready for those long hold-downs.

Keep in mind that a bail-out at high speeds will knock a tonne of air out from your system, so preparing to be held underwater without much of an air supply is important. It’s all about telling your body it needs to prepare for punishment while its guard is down.

Next comes the mental preparation – and this can by far be the toughest. Freediving instructors will tell you that while you’re under, it’s important not to anticipate how much time it’ll take before you resurface. Anticipating time will introduce stress, stress will contract your muscles and that will use up oxygen – your best friend while you’re 20 feet under the ocean.

Big wave surfers look for nothing else but a gun, anywhere from 6 to 12 foot long. A gun has more thickness 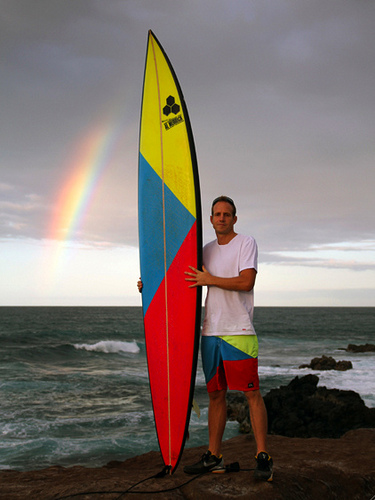 than a shortboard but way less width at both ends. A narrow frame increases the rail-to-rail contact while on the wave.

The round-pin tail is a must, as it allows surfers to dig deep into a huge wave to initiate high-speed turns. The sturdiness of a long and heavy board means it can also handle chop well. And finally, the stick needs a strong finish, so there’s less likelihood of a snap on wipeouts.

Shane Dorian rides an 11’3” with four-inch thickness. It’s double glassed for extra weight and uses quad fins. Meanwhile, Basque surfer Naxto Gonzalez switches between a 10’4”, a 9’6” and a 7’4”.

Put your hands together for the Albee’s and Shane’s and Greg’s out there!

You might have all the gear, all the knowledge and all the air of a zeppelin in your diaphragm, but if you want to challenge one of the scariest products in the ocean, you’ll need gonads above anything else.

Here’s to those big wave surfers willing to put their lives on the line, push the boundaries of extreme sport and give us something incredibly entertaining to gawk at.
*Frenetic appreciation claps*