Surfing as an “Unacceptable” Woman

I grew up in the world’s most populous Muslim country and a society that is generally conservative, regardless of one’s beliefs. So for me, yes, developing boobs and hips triggered that age-old yet timelessly awkward transition from a tomboy into womanhood. But, in addition to growing up in “Not – Bali,” Indonesia, I had to learn to navigate the labyrinth of unspoken rules governing what you can do, wear and say as a woman without embarrassing yourself, your family, your ancestors, or your pets.

Where, and when I grew up, you could either be:

My personality tended to land me in the second bucket. I was naturally a precocious tomboy who couldn’t care less about the latest beauty or fashion trends and was most comfortable hanging out with sweaty boys on the basketball court.

I ended up policing myself. I downplayed my opinions, decided to dress femininely and modestly, I giggled and flirted (but not too much!), and muddled through those years feeling uncomfortable and fake.

When I moved to the West and met women of different shapes and sizes who were comfortable expressing themselves and dressing their bodies however they wanted, it took me some time and courage to unpeel the layers of restriction I had built up to do the same. But when I did it, it was such a joy to be able to wear short shorts on a hot day!  Or know that if a guy gave me a gross stare or comment, it was a reflection on his attitudes towards women… there was nothing wrong with me!

Today, this notion of policing myself into an “acceptable” woman has popped up in my surfing life too.

There is a notable difference between surfing in places that do and do not have rigid rules of female acceptability. Residing back on Indonesian soil, it goes without saying that where I surf certainly affects what I wear and how I act.

The contrast made itself apparent when I went on a recent boat trip to the Mentawais with a bunch of girls. Little side note here, this was the highlight of my surfing life so far and an experience I cannot recommend enough. You can experience it for yourself on one of our girls trips and surf camps and get a taste of the camaraderie, beautiful sunsets over the water, and the ability to surf whatever wave is working whenever it is working.

Anyway, to get to the Mentawais, you fly into Padang, Sumatra. As you approach by air, you are treated to a stunning view of a seaside city adorned with minarets arising from Padang’s many mosques. Sumatra’s population is overwhelmingly Muslim and of a stricter variety than in many other parts of Indonesia. When we got to the harbor to board our boat, I saw that one of the girls had traveled to the crowded harbor in a midriff-baring tank top and booty-revealing holey distressed denim short shorts. I don’t know if she noticed, but I was squirming at the looks being shot at her direction. They weren’t the usual pervy, lusty looks to which women all over the world are accustomed to. They were aggressively and almost uniformly disapproving, unfriendly, and tinged with accusation.

I felt so much relief to get on the boat, with a local crew that was used to being around surfers, and who were hospitable and non-judgmental. We spent the next two weeks surfing, eating, hanging out in whatever outfits we wanted, being as opinionated and outrageously crass as only a group of female surfers can be, and having the time of our lives.

The Mentawais are an 8-hour crossing from Padang and a world away culturally. So even if you are land-based in, for example, the exclusive and private Togat Nusa Retreat or the stunning Aloita Surf Resort and Spa, you will be staying in a comfortable, beautiful place, surrounded by the best waves on earth as well as friendly and accepting locals to boot.

If the Mentawais is not off-the-beaten-track enough for you, Mahi Mahi Bungalows and Boat Charters on Simuele island and Aura Surf Resort ( also off of Sumatra) provide privacy, beauty, and wave perfection in a locale where the presence of surfer girls in bikinis (or whatever else you want to wear) is not just acceptable, but welcome. 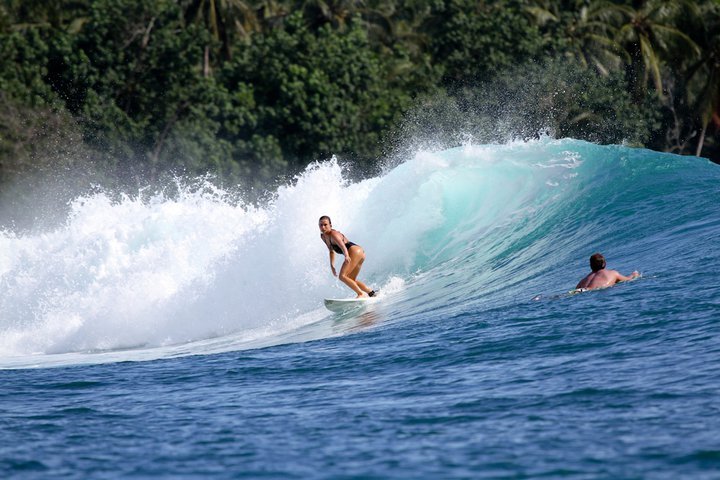 And of course, there’s always Bali, where the perfection of Indonesian waves was first discovered. Bali has been welcoming characters of all shapes, stereotypes, shades of sunburn, and degrees of debauchery for decades. The lucky local boys grew up around tanline-less boobs on the beach. The downside though is that you do pay for the super accepting locals with more crowded lineups, which is why it is a good idea to stay at a surf focused haven like The Balicamp. The Balicamp crew offers tailored surf guiding for all abilities to make sure you get into more waves best suited for improving your skill level. Alternatively, if you have a partner that does not surf, the Mondo Surf & Lifestyle Village offers bespoke packages that will keep your boyfriend/husband entertained. They offer Muay Thai training, photography, or day trips so that you can surf your brains out without worrying about hurrying back to a bored and disgruntled mister.

I do not mean to judge or discourage exploring cultures that are more conservative. In fact, being in those places provides a new perspective on how a lot of women in the world live on a daily basis, and many of them might prefer life this way. For me, it is a reminder to appreciate how relatively liberated my life is now.

More importantly, surfing, at its best, is an uninhibited expression of my joy and the interplay between me, my body, and the ocean. Worrying about what I wear or being judged (more than I already am in the lineup) because I am a woman is antithetical and impeding to attaining that kind of bliss on a surf trip. So, while I love exploring the neighborhoods, art, daily life, markets and delicious food in parts of Indonesia that may be more conservative than how I choose to live, I also love coming home, waking up for dawn patrol in a place I can be my relaxed, un-policed and “unacceptable” self.